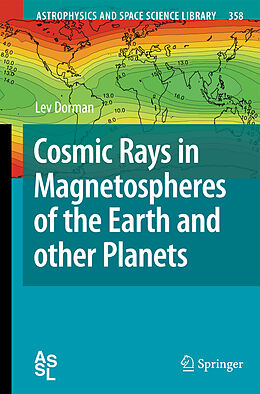 Cosmic Rays in Magnetospheres of the Earth and other Planets

The problem of cosmic ray (CR) geomagnetic effects came to the fore at the beg- ning of the 1930s after the famous expeditions by J. Clay onboard ship (Slamat) between the Netherlands and Java using an ionization chamber. Many CR la- tude expeditions were organized by the famous scientists and Nobel Laureates R. Millikan and A. Compton. From the obtained latitude curves it follows that CRs cannot be gamma rays (as many scientists thought at that time), but must be charged particles. From measurements of azimuthally geomagnetic effect at that time it also followed that these charged particles must be mostly positive (see Chapter 1, and for more details on the history of the problem see monographs of Irina Dorman, M1981, M1989). The ?rst explanations of obtained results were based on the simple dipole - proximation of the geomagnetic ?eld and the theory of energetic charged particles moving in dipole magnetic ?elds, developed in 1907 by C. Stormer to explain the aurora phenomenon. Let us note that it was made about 5 years before V. Hess discovered CRs, and received the Nobel Prize in 1936 together with K. Anderson (for the discovery of CR and positrons in CR).

Titel
Cosmic Rays in Magnetospheres of the Earth and other Planets