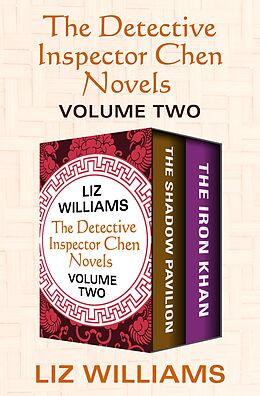 Two paranormal mysteries in an "exotic amalgam of police procedural, SF, comic fantasy, and horror . . . a delight from start to finish" (Locus). Det. Inspector Wei Chen of Singapore Three's Thirteenth Precinct is "a detective whose beat reaches to the fringes of Heaven and Hell" (Booklist). Along with his demon partner from Hell's vice squad, Zhu Irzh, Chen is the man to turn to for paranormal problems that are literally out of this world. The Shadow Pavilion: An assassin is trying to kill the Emperor of Heaven, and Detective Inspector Chen does not have his demonic partner, Zhu Irzh, to fall back on. Irzh has vanished, Chen's wife is in danger, and a psychotic Bollywood star is on the warpath. Good thing the occult detective is no stranger to chaos-because if he doesn't restore order quickly, this could be the end of the universe. "[A] clever mix of Chinese folklore and police procedural . . . The plot zips along . . . Williams seamlessly blends the occult with modern issues like feminism and illegal immigration to create a thoroughly original fantasy." -Publishers Weekly The Iron Khan: No mortal has ever heard of the Book. Few in Heaven even believe it is real. But Mhara, the Emperor of Heaven, knows the Book is very real, very powerful, and very much missing. It has a mind of its own, and it appears to have wandered off-taking the secrets of the universe with it. No ordinary mortal, Detective Inspector Chen has a lot on his plate: His wife is pregnant, his demonic partner is tracking the movement of an immortal horde, and he's the only one who can retrieve the Book and restore order to the cosmos. Before all Hell breaks loose . . . "Williams continues to expand her unique future Asia, stuffing it with lively characters, chop-socky action, demonic intrigue, amazing magic, and a tasty dash of screwball comedy. This fantasy mystery adventure will delight readers who crave originality and excitement." -Publishers Weekly

Autorentext
Liz Williams is a science fiction and fantasy writer living in Glastonbury, England, where she is codirector of a witchcraft supply business. The author of seventeen novels and over one hundred short stories, she has been published by Bantam Spectra and Night Shade Books in the US, and by Tor Macmillan in the UK. She was a frequent contributor to Realms of Fantasy, and her writing appears regularly in Asimov's and other magazines. She is the secretary of the Milford SF Writers' Workshop and teaches creative writing and history of science fiction.

Untertitel
The Shadow Pavilion and The Iron Khan