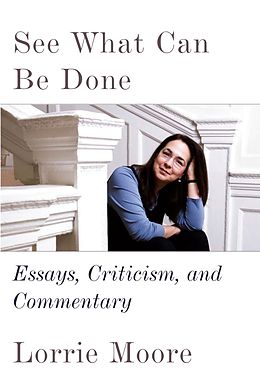 See What Can Be Done

A New York Times Critic's Top Pick of the Year

This essential, enlightening, truly delightful collection shows one of our greatest writers parsing the political, artistic, and media landscape of the past three decades. These sixty-six essays and reviews, culled from the pages of The New York Review of Books, The New York Times, Harper's, The Atlantic, and The New Yorker, among others, find Lorrie Moore turning her discerning eye on everything from Philip Roth to Margaret Atwood, from race in America to the shocking state of the GOP, from celebrity culture to the wilds of television, from Stephen Sondheim to Barack Obama. See What Can Be Done is a perfect blend of craft, brains, and a knowing, singular take on life, liberty, and the pursuit of (some kind of) happiness.

LORRIE MOORE is the Gertrude Conaway Vanderbilt Professor of English at Vanderbilt University. She is the recipient of the Irish Times International Prize for Literature, a Lannan Foundation fellowship, as well as the PEN/Malamud Award and the Rea Award for her achievement in the short story. She is a member of the American Academy of Arts and Letters. She lives in Nashville, Tennessee.

Titel
See What Can Be Done