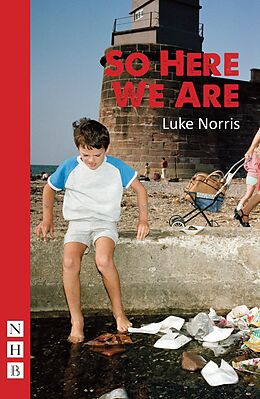 So Here We Are (NHB Modern Plays)

Frankie's dead. And no one's quite sure why. But the boys won't talk about it. They can't. There are some truths that men can't share.

So Here We Are is a play about what can happen when nothing happens, a compassionate look at young lives cut short and a touching portrait of childhood friendships under strain in adult life.

The play was a winner of a Judges Award at the 2013 Bruntwood Prize for Playwriting. It premiered at the HighTide Festival in September 2015, in a co-production with the Royal Exchange, Manchester, in a production directed by Steven Atkinson.

Luke Norris is a writer and actor. Luke has acted at the Royal Exchange Theatre in Orpheus Descending. His writing credits include: Growth (Gate Theatre); Hearts (National Theatre Connections); A Puzzle (Site Specific piece for the Royal Court); Goodbye To All That (Jerwood Theatre Upstairs) and Borough Market (Edinburgh Fringe).

Titel
So Here We Are (NHB Modern Plays)