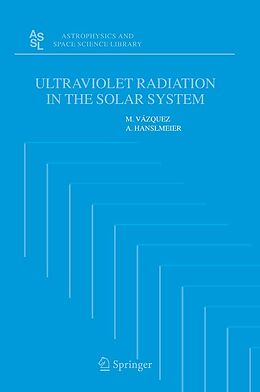 Ultraviolet Radiation in the Solar System

In the history of science the opening up of a new observational or experimental window is always followed by an increase in knowledge of the subject concerned. This is also the case with the subject of this book, ultraviolet radiation (hereafter UV). In principle, the ultraviolet range might be just one more of these windows, of no particular importance. However, the energy per UV photon provides the main peculiarity, its magnitude being great enough to produce important ch- ical reactions in the atmospheres of planets and satellites, thereby a?ecting the transmission of this radiation to the ground. The Sun is the main natural source of UV radiation in the Solar System and our planet is the body where its in?uences can be best tested and the only one where its relation with life can be studied. However, the terrestrial atmosphere blocksmostofthephotonsinthiselectromagneticrangeandastronomershavehad to develop various techniques (balloons, planes and rockets) to cross this barrier and access the information. These tools have been used in parallel to investigate the physical properties of the terrestrial atmosphere and the interaction of its constituents with light. This book will addresses most of these topics.

UV radiation is an important part in the electromagnetic spectrum since the energy of the photons is great enough to produce important chemical reactions in the atmospheres of planets and satellites of our Solar System, thereby affecting the transmission of this radiation to the ground and its physical properties. Scientists have used different techniques (balloons and rockets) to access to the information contained in this radiation, but the pioneering of this new frontier has not been free of dangers.

The Sun is our main source of UV radiation and its description occupies the first two chapters of the book. The Earth is the only known location where life exists in a planetary system and therefore where the interaction of living organism with UV radiation can be tested through different epochs and on distinct species. The development of the human technology has affected the natural shield of ozone that protects complex lifeforms against damaging UV irradiation. The formation of the ozone hole and its consequences are described, together with the possible contribution of UV radiation to recent climate changes. Finally, we will discuss the potential role of ultraviolet light in the development of life on bodies such as Mars, Europa and Titan.

The Solar System is not isolated; other external sources can contribute to the enhancement of the UV radiation in our environment. The influence of such events as nearby supernovae and gamma-ray bursts are described, together with the consequences to terrestrial life from such events.