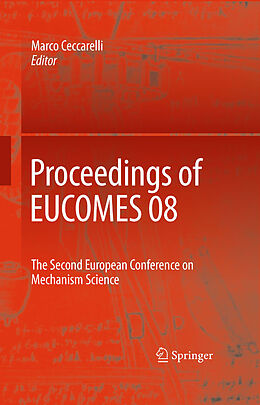 The EUCOMES08, Second European Conference on Mechanism Science is the second event of a series that has been started in 2006 as a conference activity for an European community working in Mechanism Science. The ?rst event was held in Obergurgl, Austria in 2006. This year EUCOMES08 Conference has come to Cassino in Italy taking place from 17 to 20 September 2008. TheaimoftheEUCOMESConference istobringtogetherEuropean researchers, industry professionals and students from the broad ranges of disciplines referring to Mechanism Science, in an intimate, collegial and stimulating environment. In this second event we have received an increased attention to the initiative, as canbeseenbythefactthattheEUCOMES08Proceedingswillcontaincontributions by authors even from all around the world. This means also that there is a really interest to have not only a conference frame but even a need of aggregation for an European Community well identi?ed in Mechanism Science with the aim to strengthen common views and collaboration activities among European researchers and institutions. I believe that a reader will take advantage of the papers in these Proceedings with further satisfaction and motivation for her or his work. These papers cover the wide ?eld of the Mechanism Science. The program of EUCOMES08 Conference has included technical sessions with oral presentations, which, together with informal conversations during the social program, have enabled to offer wide opportunities to share experiences and discuss scienti?c achievements and current trends in the areas encompassed by the EUCOMES08 conference.

Marco Ceccarelli was born in Rome in 1958. He received the mechanical engineer degree cum laude in 1982 at the University "La Sapienza" of Rome. At the same University he completed a Ph.D. in Applied Mechanics in 1988. In 1987 he was visiting scholar at Stanford University, U.S.A., and in 1990 he received a CNR-NATO annual grant as visiting professor at the Technical University of Valencia, Spain. Since 1990 he teaches courses on Mechanics of Machinery and Mechanisms, and Mechanics of Robots at the School ofEngineering at the University of Cassino. Since 1996 he is Director ofLARM, the Laboratory ofRobotics and Mechatronics of DiMSAT, the Department of Mechanics, Structures, Environment and Territory at the University of Cassino. Since 2001 he has been appointed Full Professor of Mechanics of Machinery and Mechanisms at the University of Cassino. From 2003 to 2005 he has been Vice Director of DiMSAT.
He is member of ASME (The American Society of Mechanical Engineers), AIMETA (Italian Society for Theoretical and Applied Mechanics), AEIM (Spanish Society of Mechanical Engineers), SRI (Italian Association of Robotics and Automation), IEEE (the Institute of Electrical and Electronics Engineers), FeIbIM (Iberoamerican Federation for Mechanical Engineering).
From 1998 to 2004 he has been Chairman ofthe Permanent Commission for History of Machine and Mechanism Science of IFToMM, the International Federation for the Promotion of Machine and Mechanism Science, and currently he is still a member. He is also member of the IFToMM Commission for Robotics. He is Chairman of the Commission for Mechatronics of FeIbIM, Federaciôn Iberoamericana de kigenieria Mecànica. He is Chairman of the Scientific Committee of MUSME, IFToMM-FeIblM International Conference on Mechatronics and Multibody Systems. He is member of scientific Committees for several conferences, like RAAD, Romansy, CK; he is associate editor for the journal Transactions of CSME (the Canadian Society of Mechanical Engineers); he has served as associated editor for Mechanism and Machine Theory; he has served as reviewer for several international conferences and journals; he has served as reviewer for national and international projects for Italian and foreign agencies. He has given invited lectures and short courses in many countries. He has carried out consulting activity for companies and in industrial plants on problems regarding with Automation and Robotics. He has been Scientific Editor for the Proceedings of HMM 2000 and HMM2004, International Symposium on History of Machines and Mechanisms. He has been Chairman for HMM 2000 and 2004 that have been held in Cassino; he has been Co-Chairman for MUSME in 2002 in Mexico City and in 2005 in Uberlandia, Brazil. He has been Chairman for RAAD International Workshop on Robotics in Alpe-Adria Danube Region held in Cassino in 1997 and 2003. He has been Chairman for CK2005, IFToMM International Workshop on Computational Kinematics that has been held in Cassino in 2005. He has written the book 'Fundamentals of Mechanics of Robotic Manipulation' published by Kiuwer/Springer in 2004.
In November 2003 he has received the Degree of Doctor Honoris Causa from UNI, National University of Lima, Peru, as recognizing his academic and scientific career, and his support to the activity of UNI in Mechatronic Engineering.
He has been indicated as Coordinator of the Commission for Research of GMA, Italian National Group for Mechanics of Machinery for the period 2002-2006. He has been elected Secretary- General of IFToMM for the term 2004-2007.
His research interests cover aspects of Theory of Machines and Mechanisms (TMM) and Mechanics ofRobots. Specific subjects ofhis interest are Analysis andDesign ofWorkspace and Manipulation; Mechanical Design of Manipulators, Legged Robots, and Grippers; Mechanics of Grasp; History of TMM; and Mechanism Design.
He is author or co-author of more than three hundreds, which have been presented at Conferences or published in national and international journals.
More information at the web page: http://webuser.unicas.it/weblarm/larmindex.htm; bitp://webuser.unics.i1/ceccarelli

This volume contains most of the papers presented at EUCOMES 2008, the Second
European Conference on Mechanism Science.

The contributions have been grouped in sessions on Theoretical and Computational Kinematics, History of Mechanism Science, Design Algorithms, Mechanism Designs, Mechanical Transmissions, Gearing Systems, Manipulators, Linkages, Mechanics of Robots, Experimental Mechanics, Dynamics of Multibody Systems, Industrial Applications, and Non Industrial Applications. However, the topics are not limited to these subsections only but reflect the wide range of Mechanism Science.

It is hoped that this collection of papers will continue to stimulate research and consolidate the opportunities the conference created to share experiences and discuss scientific achievements and current trends in Mechanism Science (especially) in Europe.