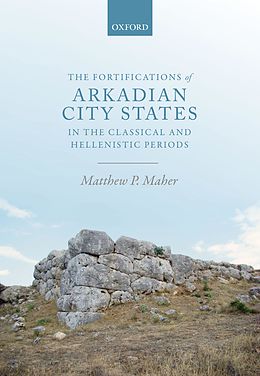 The Fortifications of Arkadian City States in the Classical and Hellenistic P...

This illustrated study comprises a comprehensive and detailed account of the historical development of Greek military architecture and defensive planning, specifically in Arkadia in the Classical and Hellenistic periods. Employing data gathered from the published literature, and collected during the field reconnaissance of every site, the fortification circuit of each Arkadian polis is explored. In this way, the book provides an accurate chronology for the walls in question; an understanding of the relationship between the fortifications and the local topography; a detailed inventory of all the fortified poleis of Arkadia; a regional synthesis based on this inventory; and the probable historical reasons behind the patterns observed through the regional synthesis. Maher argues that there is no evidence for fortified poleis in Arkadia during the Archaic period. However, when the poleis were eventually fortified in the Classical period, the fact that most appeared in the early fourth century BC, strategically distributed in limited geographic areas, suggests that the larger defensive concerns of the Arkadian League were a factor. Although the defensive responses to innovations in siege warfare and offensive artillery of the Arkadian fortifications follow the same general developments observable in the circuits found throughout the Greek world, there does exist a number of interesting and noteworthy, regionally specific, patterns. Such discoveries validate the methodology employed and clearly demonstrate the value of an exclusively regional focus for shedding light on a number of architectural, topographical, and historic issues.

Matthew P. Maher is a classical archaeologist that has worked at a number of different projects in Greece over the last 15 years (including Stymphalos and most recently at Sikyon where he is a field supervisor of the current excavations). Besides Greek military architecture (and Greek archaeology in general), Maher is interested in 19th century travel writing in Greece, Pausanias, modern Greek folklore, and Roman ceramics. He was awarded a DPhil by the the University of British Columbia in 2012.

Titel
The Fortifications of Arkadian City States in the Classical and Hellenistic P...