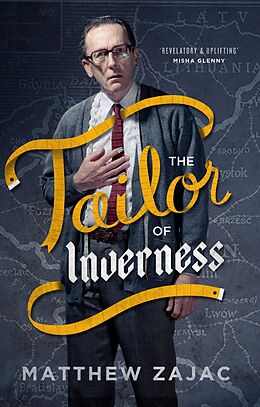 The Tailor of Inverness is a story of journeys, of how a boy who grew up on a farm in Galicia (Eastern Poland, now Western Ukraine) came to be a tailor in Inverness. His life spanned most of the 20th century. His story is not straightforward. He was taken prisoner by the Soviets in 1939 and forced to work east of the Urals, then freed in an amnesty after the German invasion of the Soviet Union in 1941. He then joined the thousands of Poles who travelled to Tehran, then Egypt, to be integrated into the British Army, fighting in North Africa and Italy. He was then resettled in Britain in 1948, joining his brother in Glasgow. This is the story he told.

Matthew Zajac grew up in Inverness and studied drama at Bristol University. He has worked as an actor for 30 years, appearing in theatres throughout the UK, and in numerous film, TV and radio productions. He has worked as a director and producer for several theatre companies and has also produced two films. He is currently Joint Artistic Director of Dogstar Theatre Company which tours its productions in Scotland and abroad. In 2009, he was named Best Actor in the Critics' Awards for Theatre in Scotland for his performance in his play The Tailor of Inverness. The play has won several other awards and has toured extensively in Scotland and to Poland, Ukraine, Germany, Sweden, Australia and the USA. Further touring to Denmark, Sweden, Ireland and the USA will take place in 2013. Matthew is based in Edinburgh.