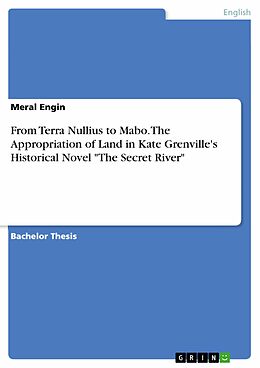 From Terra Nullius to Mabo. The Appropriation of Land in Kate Grenville's His...

Bachelor Thesis from the year 2017 in the subject English Language and Literature Studies - Literature, grade: 1,3, University of Bonn, course: Settler Colonial Narratives (Australia), language: English, abstract: This paper tries to reconstruct the history of European Settlers coming to Australia in order to build up a new existence on foreign ground. The overall aim is to establish an understanding of the concept of terra nullius that labeled Australia literally into a no man's land and thereby justified and enabled its annexation by the inrushing convicts, settlers, entrepreneurs and adventurers. Within colonial discourse a colony was founded on the acquisition of land by occupation or settlement of a terra nullius. Although the presence of the Indigenous peoples was acknowledged, they were considered to be primitive and uncivilised. According to the colonial power without any visible political system the Indigenous peoples had no sovereignty over the land and no laws that would assert their land rights. Driven by the empowerment of terra nullius the newcomers claimed land as their own, mapped and named it. With these insights the focus of this paper will shift to the historical novel The Secret River by Kate Grenville in order to follow the protagonist William Thornhill's efforts to build up a new existence for his family in Australia and to present how the settlers' motivations and methods of claiming and possessing of land were implemented. The dispossession of the Indigenous peoples of Australia was legally recognised through the Mabo judgement in 1992 that overturned the terra nullius fiction and acknowledged that Indigenous peoples had lived in Australia for thousands of years and enjoyed rights to their land according to their own laws and customs.

Titel
From Terra Nullius to Mabo. The Appropriation of Land in Kate Grenville's His...