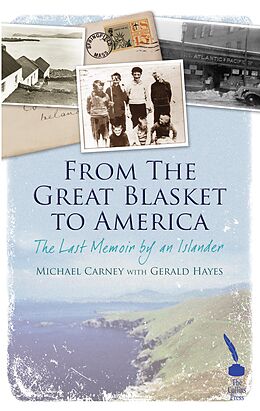 From the Great Blasket to America

Mike Carney was born on the Great Blasket Island in 1920 in that unique, isolated Irish-speaking community. Mike left in 1937 to seek a better future in Dublin and eventually settled in Springfield, Massachusetts, with other former islanders. The death on the island of his younger brother set off a chain of events that led to its evacuation, in which Mike played a pivotal role. This is the story of his life and his efforts to promote Irish culture in America, to preserve the memory of The Great Blasket, to respect roots left behind and to set down roots in a new land. Written as Mike approached the age of 93, this memoir is probably the last of a long line of books written by Blasket Islanders. * Similar to: An Irish Navvy - the Diary of an Exile and The Hard Road to Klondike

Autorentext
Mike Carney (Micheál Ó Ceárna), born in 1920 on The Great Blasket Island, emigrated to the Hungry Hill neighbourhood of Springfield, Massachusetts in 1948. He knew little English when he travelled to the mainland at sixteen. In Dublin he worked as a barman and wrote an Irish-language column for The Irish Press. In Springfield, he worked as a grocery store manager and as a security officer. He was president of the John Boyle O'Reilly Club for sixteen years and helped to create the Blasket Island Centre (Dunquin). He was awarded an honorary doctoral degree in Celtic literature from the National University of Ireland Maynooth in 2009, honouring his lifelong devotion to preserving the language and culture of his native place.Gerald Hayes is married to Mike's daughter Maureen. He visits West Kerry frequently with his family and makes the trip over to The Great Blasket itself whenever weather conditions allow. Hayes is a retired vice-president of Westfield State University in Massachusetts.

Titel
From the Great Blasket to America

Untertitel
The Last Memoir by an Islandman