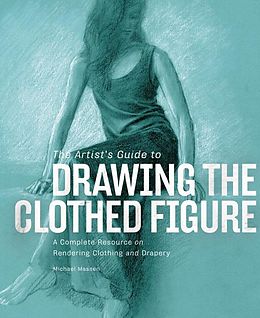 The Artist's Guide to Drawing the Clothed Figure

In order to effectively draw clothing and drapery, an artist must recognize the basic shapes of clothing and how the principles of physics act upon those shapes.
Beginning with the basic shapes of clothing and the anatomy of folds, and progressing to final rendering techniques of both sculpted and loose drapery on solid forms-including how motion affects wrinkles, folds, and waves, The Artist's Guide to Drawing the Clothed Figure presents a novel and completely thorough approach to understanding the mechanics of drapery.
This comprehensive resource examines the mechanical principles behind the formation of folds: simple wave patterns, intersecting wave patterns, and tertiary effects upon these two, such as twisting and flowing forms. The book breaks down all clothing into three types: sculpted forms, loose drapery, and, most especially, tubes.
Once these mechanics are established, various techniques for rendering clothing are presented, including how factors such as the stiffness, thickness, or texture of a particular material can affect the appearance of an article of clothing. Throughout, the author examines examples from master draftspersons-old masters, cartoonists, illustrators, and fashion illustrators, including Leonardo da Vinci, Ingres, Degas, Joseph Christian, Leyendecker, Charles Dana Gibson, Raphael, and Will Eisner-to see how they interpreted this information.

MICHAEL MASSEN is an artist and graphic designer. His clients have included Scholastic, HarperCollins Publishers, Estée Lauder, Goldman Sachs, NW Ayer, and Workman Publishing. In 1993, he was awarded the National Sculpture Society Young Sculptors' Award and was recognized by the Art Students League of New York with two scholarships. He has an MFA from the New York Academy of Art and a BA from the College of Letters of Wesleyan University. He has had exhibitions around the country and in New York City.

Titel
The Artist's Guide to Drawing the Clothed Figure

Untertitel
A Complete Resource on Rendering Clothing and Drapery