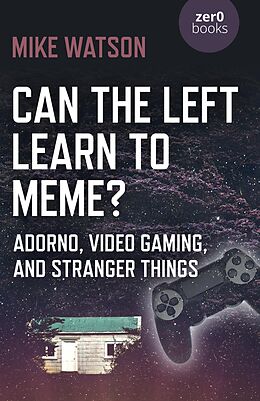 Can the Left Learn to Meme?

Taking in an array of cultural references from the contemporary art world, to cat memes, Stranger Things, the Kardashian-Jenners, Mad Men, Run the Jewels, and video gaming, Can the Left Learn to Meme? argues that there is positivity in millennial-era cultural production. Utilising Adorno's unswerving yet understated hope in spite of the odds, Mike Watson embraces the abstraction of the new media landscape as millennials refuse to surrender to cynicism, by out-weirding even the world at large. They pose a radical alternative to the right wing approach of Steve Bannon and the conservative psychology of Jordan Peterson. Here, the cultural elitism of the art world is contrasted with the anything-goes approach of millennial culture. The left avant-garde dream of an art-for-all is with us, though you won't find it in museums. It is time the left learned to meme, challenging conventions along the way.

Autorentext
Mike Watson is an art theorist, critic and curator who holds a PhD in Philosophy from Goldsmiths College. Watson curated at the 55th and 56th Venice Biennale, as well as at Manifesta12 in Palermo. He has written regularly for Art Review, Artforum, Frieze, and Radical Philosophy. He lives and works in Oulu, Finland.

Titel
Can the Left Learn to Meme?