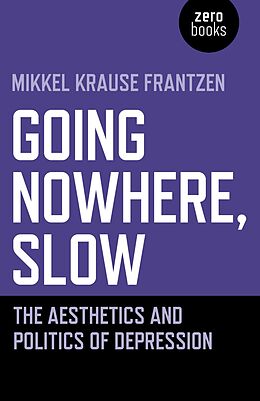 Using examples from art and literature, Frantzen explores the social, political and economic implications of both real and imagined depression. Is feeling blue a symptom of the death of progress? Was the suicide of David Foster Wallace a proverbial canary in a coal mine? Margaret Thatcher once declared that there is no alternative to the social order that we now reside within. Have we accepted her slogan as a fact, and is that why so many are on Prozac and other anti-depressants? Frantzen examines the works of Michel Houellebecq, Claire Fontaine and David Foster Wallace as he seeks out an answer and a way to formulate a new future oriented left movement.

Autorentext
Mikkel Krause Frantzen is a postdoc at the University of Aalborg, and literary critic at the Danish newspaper Politiken. His research brings together interpenetrating questions of aesthetics and politics. Frantzen gained his PhD from the Department of Arts and Cultural Studies, University of Copenhagen. He lives in Copenhagen, Denmark.

Untertitel
The Aesthetics and Politics of Depression