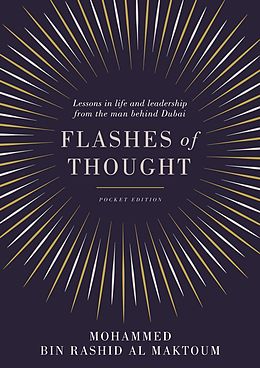 If you thought it was worth hearing the insights of a man at the head of a major corporation or who has turned around a disaster-prone technology company, here's a new level. This book is packed with ideas for governance, leadership and life from the man behind the city that's home to the world's tallest tower, largest mall and two million people from 220 nationalities - backed by the world's busiest airport and the biggest manmade seaport on earth. This is Dubai and its ruler, Sheikh Mohammed. And these are his inspirations for leadership and success.

Available for the first time in an updated and refreshed Pocket Edition, Sheikh Mohammed shares the many important ideas which not only sit at the heart of his vision for his nation but are also central to the wellbeing of society and personal happiness. By bringing together these unique experiences, ideas and thoughts, Flashes of Thought offers a compelling routemap and blueprint for professional and personal fulfilment.

Autorentext
Sheikh Mohammed bin Rashid Al Maktoum is the Prime Minister and Vice President of the United Arab Emirates and the Ruler of Dubai. He is the driving force behind Dubai's remarkable transformation into a major global city. His initiatives in creating strategic economic opportunities for Dubai have resulted in world leading enterprises such as Emirates Airline, Jumeirah Group, DP World, Dubai Internet City, Media City, Dubai International Finance Centre and Dubai World Central, the world's first purpose-built aerotropolis.A passionate proponent of open, service-led governance and strategic planning, Sheikh Mohammed has driven major government reform in the UAE. He is the founder of the famous Godolphin and Darley racing operations as well as the world's richest race, the annual Dubai World Cup. A trained pilot and champion endurance rider, he is also an acclaimed poet in his native Arabic.

Untertitel
Lessons in life and leadership from the man behind Dubai