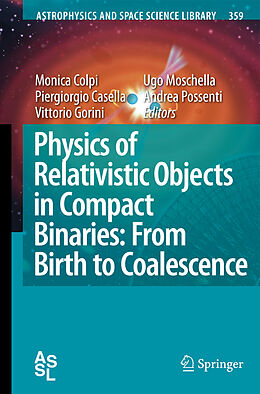 Physics of Relativistic Objects in Compact Binaries: from Birth to Coalescenc...

This book provides a comprehensive, authoritative and timely review of the astrophysical approach to the investigation of gravity theories. Particular attention is paid to strong-field tests of general relativity and alternative theories of gravity, performed using collapsed objects (neutron stars, black holes and white dwarfs) in relativistic binaries as laboratories. The book starts with an introduction which gives the background linking experimental gravity in cosmic laboratories to astrophysics and fundamental physics. Subsequent chapters cover observational and theoretical aspects of the following topics: from binaries as test-beds of gravity theories to binary pulsars as cosmic laboratories; from binary star evolution to the formation of relativistic binaries; from short gamma-ray bursts to low mass X-ray binaries; from stellar-mass black hole binaries to coalescing super-massive black holes in galaxy mergers. The book will be useful to researchers, PhD and graduate students in Astrophysics, Cosmology, Physics and Mathematics who are interested in relativistic astrophysics, experimental gravity and general relativity.

Monica Colpi is professor in stellar astronomy and relativistic astrophysics at the Department of Physics of the University of Milano Bicocca, Italy. Born in 1957 in Rovereto (TN), she graduated in physics in 1982 and earned her Ph.D. degree in 1987 at the University of Milano. She has been a visiting scientist at Cornell University and postdoctoral fellow at the International School for Advanced Study (ISAS/SISSA) in Trieste. Since 1991 she has been a permanent staff member at the University of Milano. Monica Colpi is author of numerous scientific papers published in international journals, mainly in the fields of high energy astrophysics and compact objects. She has contributed relevant studies on the theory of accretion; the secular/dynamical/internal evolution of neutron stars in the Milky Way, from magnetars to pulsars and x-ray sources; the structure and stability of neutron stars; on boson stars; on black holes and neutron stars natal kicks ; and on the dynamics of massive black holes in merging galaxies and dense stellar systems, in the context of models for the formation of galactic structures.

Titel
Physics of Relativistic Objects in Compact Binaries: from Birth to Coalescence