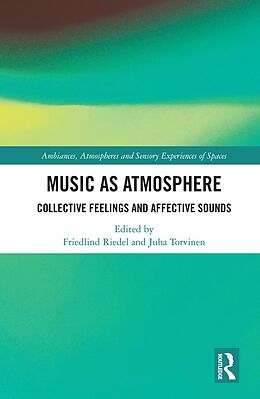 This book probes into cutting edge conceptual issues at the forefront of contemporary discussions on atmosphere, atmospherology and affect. It also extends the spatial and relational focus towards fundamentally temporal questions of performance, process, timbre, resonance and personhood. The capacity of atmospheric relations to imbue a situation with an ambient feeling and to modulate social collectives is highlighted, as well as auditory experience as a means of connecting with feelings. In addition to original research, the volume features a first translation of an important text by German phenomenologist Hermann Schmitz, and a debate on affect and atmosphere between the philosophers Jan Slaby and Brian Massumi.

This novel contribution to the field of music research provides a strong theoretical framework, as well as vibrant case studies, which will be invaluable reading for scholars and students of music, sound, aesthetics, media, anthropology and contemporary philosophy.

Friedlind Riedel is a doctoral researcher at the Kompetenzzentrum Medienanthropologie at Bauhaus-Universität Weimar. Her interests include music and performing arts in Myanmar, cultural histories of listening and philosophies of music.

is Senior Lecturer at the Musicology department of the University of Helsinki. He holds the title of Docent of musicology in Universities of Helsinki and Turku. Torvinen's research interests include philosophy of music, ecomusicology and contemporary Finnish popular and art music.