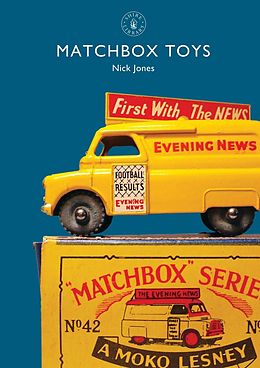 Matchbox toys were ubiquitous items for children across the Western world. Originally labelled Christmas-cracker trash by retailers and shopkeepers, the small-scale 1-75 series soon began to see unprecedented worldwide sales in the 1950s. Smaller and cheaper than most of its competitors' toys, Matchbox models were also far more accurately modelled, but the company has nevertheless seen its own share of competition and challenging times over the years. In this beautifully illustrated book, Matchbox collector Nick Jones tells the story of Matchbox and its most famous toys, from the Coronation Coach to Hotwheels dragsters, and complements the story with beautiful, previously unpublished photographs.

Nick Jones has always loved Matchbox toys, from playing with them in his garden at the age of four to collecting the components from the pavement outside the factory at fifteen, and then becoming a keen collector in adulthood. He runs the website www.vintagebritishdiecasts.co.uk and lives in the UK.

The Birth of Lesney 1947-56
The '1-75' Series Regular Wheels 1953-69
The '1-75' Series Superfast Issues 1969-83
Accessory Packs, Major Packs and the Kingsize Range
The Models of Yesteryear
Service Stations, Roadways and Catalogues
The Final Days
Further Reading and Other Information
Index