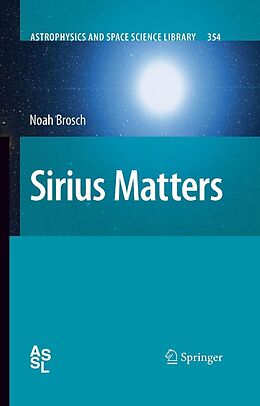 Since very early times Sirius was a point of attraction in the night sky. It served to synchronize calendars in antiquity and was the subject of many myths and legends, including some modern ones. It was perceived as a red star for more than 400 years, but such reports were relegated to the Mediterranean region. Astronomically, Sirius is a very bright star. This, and its present close distance to us, argues in favor of it being the target of detailed studies of stellar structure and evolution. Its binary nature, with a companion that is one of the more massive white dwarfs, is an additional reason for such studies. This book collects the published information on Sirius in an attempt to derive a coherent picture of how this system came to look as it does.

Noah Brosch completed his first and second degrees at Tel Aviv University in Israel and received his PhD in Astronomy from the University of Leiden in the Netherlands for a study of isolated galaxies. Since 1983 he served in various functions at Tel Aviv University's Wise Observatory, presently as Director. Brosch is also the Principal Investigator of the TAUVEX Ultraviolet Space Telescope, the first space astronomy mission of Israel, scheduled for a 2008 launch. He is a past Chairman of the Israel Astronomical Association and is a well-known science educator, popular science writer and lecturer. The main scientific interest of Noah Brosch is evolutionary processes in galaxies with emphasis on the dwarf galaxies, but he publishes papers on a variety of topics from objects in our Solar System, through space astronomy, to extragalactic research.