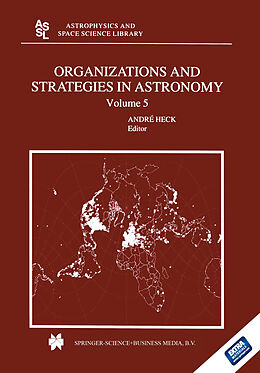 Anyone who doubts that astronomy is enjoying a golden age has only to browse the pages of Organizations and Strategies in Astronomy, Vol. 5. Our golden age is defined not only by the enormity of new discoveries of dark energy, dark matter, extra-solar planets, and the evolution of Mars, but also by the breadth, diversity, and creativity within our community. This volume records our history, in a period of such rapid change and growth that individual astronomers are hard-pressed to keep abreast of their own fields and neighborhoods, much less of developments world-wide. Since the 1950's, changes in the landscape of astronomy are manifold. We have witnessed two epochs of big telescope construction, the 4-meter class telescopes of the '60s and '70s and the 8-to lO-meter class telescopes of the '90s, continuing through today. We accomplished the transition from photographic to digital data, and we continue to improve the size and sen­ sitivity of astronomical detectors. We have witnessed the flowering of radio astronomy and the opening of the full electromagnetic spectrum through space astronomy. We have seen the growth of national and international astronomy facilities, and a dramatic broadening of the accessibility of data, both through observing facilities available through open competition based on scientific merit and through deep, rich archives of data.