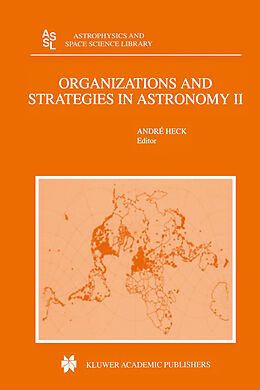 Seated in a sun-lit corner of his 17th century Dutch house, his hand touching a celestial globe, Johannes Vermeer's "Astronomer" seems to pon­ der about the mysteries of the universe. We might make the trip to Paris and ask him, in the Louvre, what precisely is on his mind. Unfortunately, there will be no answer. But we do know what his mind was not on. It was not on the approaching deadlines for the proposals he would have to write for getting funds and telescope-time, not on the meeting of the observing programs committee, not on his refereeing duty for the journal Astronomy & Astrophysics, nor on his university's tightening budget for science. In the Kapteyn Institute at Groningen I stand face to face with the im­ pressive portrait of J.C. Kapteyn, painted in the year 1918. Seated at his desk he is doing his calculations with pen, pencil and tables, perhaps check­ ing the work of his skilled staff of human computers. Early in his career he had completed his magnum opus, the Cape Photographic Durchmusterung in collaboration with his close friend David Gill at Capetown, South Africa.