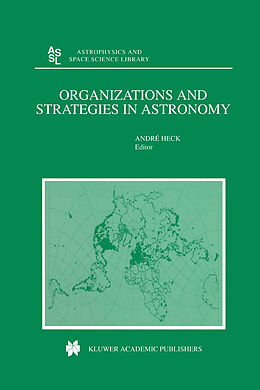 Research and publications in the field of Astronomy have undergone dramatic changes in the last half-century. While activities just slowed down during World War II in the US and in Latin America, they were very strongly affected by the difficult conditions prevailing among the European belligerent nations. Half a century ago, re­ search activities were mostly confined to observatories (linked or not to universities) and usually separated from the teaching of physical sciences. Hence, directors of observatories played an important role in the choice of the research fields, and "schools" of research appeared at various places, de­ veloping specific instrumentation, reduction techniques and mathematical methods to achieve their scientific goals. Reorganising the research activities after the war was no minor under­ taking, specially because communications were interrupted for over five years and isolated continental Europe from overseas activities. Scarcity of observing instruments (some of them being requisitioned by occupy­ ing armies) , enormous gaps in the available litterature led to local research activities, conducted independently of similar efforts undertaken elsewhere.

Foreword; L. Houziaux. Introduction; A. Heck. Astronomy-Related Organizations: Geographical Distributions, Ages and Sizes; A. Heck. The Astronomische Gesellschaft: Pieces from its History; W. Pfau. What Can We Learn from Publications Studies? H.A. Abt. Observation of Scientific Publications in Astronomy/Astrophysics; L. Esterle. The Refereeing System in Astronomy; S.R. Pottasch. NASA Program Solicitations, Proposal Evaluations, and Selection of Science Investigations; J.D. Bohlin. Planning and Implementation of ESA's Space Science Programme; S. Volonte. Communicating in Astronomy; A. Heck. The Problem of English as a Foreign Language in Professional Astronomy; T.J. Mahoney, et al. Astronomy and the General Public: A Historical Perspective; J. Meadows, et al. The Conferences on `The Inspiration of Astronomical Phenomena': Excursions into `Cross-Overs' between Science, the Arts and Literature; R.E. White. Bibliography of Socio-Astronomy.