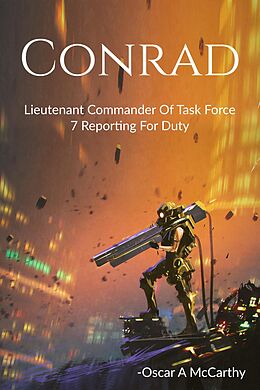 Laser burns scarred the metal frames of half-melted, barely recognizable structures. The ground was torn apart from battle, and not a blade of fresh grass could be seen. All had been stomped underfoot or burned in the many beds of flames that had sprung up around the town. Bodies strewn across the landscape still bled into the earth, and various half-blackened body parts littered the insides of nearly every building. Conrad studied the scene. He'd seen it before, numerous times. The carnage was typical in his line of work. But he'd never enjoyed it. The type of people who enjoyed terrifying destruction like this didn't belong in the military.

His communicator beeped, and a holo-image appeared in front of him, projected by the plastic device hooked around his ear. "Lieutenant Commander. The area has been cleared, and we are in the process of counting the wounded and dead." The Lieutenant, whose shape vaguely wavered in the air, spoke precisely. "What should be done with those we captured?"

Conrad nodded. "Good. Continue with clean-up. Treat the prisoners' wounds and make sure they are kept under close guard. We're not hurting them, but the unit needs their cooperation."

"Understood." The image flickered away.