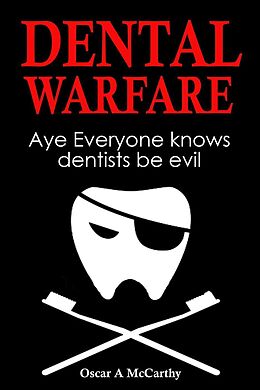 AYE EVERYONE KNOWS DENTISTS BE EVIL

I could stay aboard this ship for the rest of my life.

The salty air filled Spencer's lungs and the wind bit his face. This was his first time on a ship. He thought he would hate it. He did hate it at first, but it grew on him quick.

He simply had to become accustomed to the smell of the sea and the motions of the boat that at first made him feel sick. Made him sick, after enough time. He simply drank too much. Thankfully, he was near the railing of the ship and no one had to clean it up.

Pirates. The good pirates. Pirates were the only people you could really trust, weren't they? Give a pirate a task and he'll get it done every time. Give him a secret and he'll protect it like it was his.

Tell him the fate of the entire world was on an island a thousand miles from shore and they'll be happy to escort you there and fight your battle. A battle with the truest of evil.

The most evil of evil.

Everyone knows dentists are evil. Goodness, how could they not be? They receive their paycheck for sticking metal sticks into people mouths and ripping up their gums.