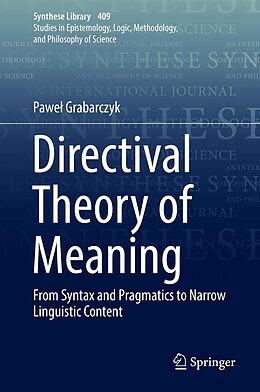 This book presents a new approach to semantics based on Kazimierz Ajdukiewicz's Directival Theory of Meaning (DTM), which in effect reduces semantics of the analysed language to the combination of its syntax and pragmatics. The author argues that the DTM was forgotten because for many years philosophers didn't have conceptual tools to appreciate its innovative nature, and that the theory was far ahead of its time.

The book shows how a redesigned and modernised version of the DTM can deliver a new solution to the problem of defining linguistic meaning and that the theory can be understood as a new type of functional role semantics. The defining feature of the DTM is that it presents meaning as a product of constraints on the usage of words. According to the DTM meaning is not use, but the avoidance of misuse.

Readers will see how the DTM was shelved for reasons that we don't find so dramatic anymore, and how it contains enough original ideas and solutions to warrant developing it into a full-blown contemporary account. It is shown how many of the underlying ideas of the theory have been embraced later by philosophers and treated simply as brute facts about natural languages or even as new philosophical discoveries.

Philosophers of language and researchers with an interest in how languages and the mind work will find this book a fascinating read.

Pawel Grabarczyk is a Polish philosopher of language and mind, working as an assistant professor at the Institute of Philosophy at the University of Lodz and as a post-doc at IT University of Copenhagen. He is the author of several articles on the notion of "meaning", "concept" and Ajdukiewicz's directival theory of meaning. He is the head of the Centre for Philosophical Research, the largest Polish non-governmental philosophical organization and the editor in chief of two journals: HYBRIS and Replay: Polish Journal of Game Studies.

Untertitel
From Syntax and Pragmatics to Narrow Linguistic Content