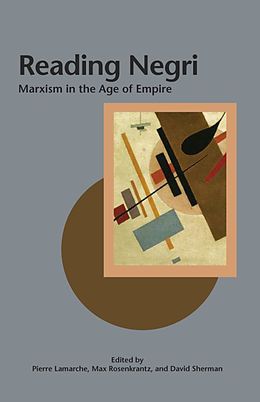 Antonio Negri is the most important Marxist theorist working today. His writings include novel readings of classical philosophers such as Machiavelli, Descartes, and Spinoza, revolutionary reinterpretations of the central texts of Marx, and works of contemporary political analysis. Negri is known in the English-speaking world primarily through Empire, a work he co-authored with Michael Hardt in 2000 that became a surprise academic best-seller. His other writings, which have great depth and breadth, are equally deserving of attention. While most critical accounts of Negri focus only on Empire, this collection of essays presents readers with a fuller picture of Negri's thought, one that does justice to his ability to use the great texts of the philosophical tradition to illuminate the present. The collection contains essays from scholars representing a broad spectrum of disciplines and interests, and it offers both criticism of and positive commentary on Negri's work.

David Sherman is Associate Professor of Philosophy at the University of Montana, Missoula.

Untertitel
Marxism in the Age of Empire