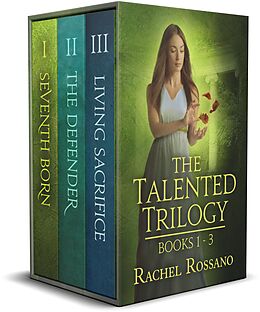 The complete Talented Trilogy all in one ebook!

In a world where seventh born sons are valued for their strength and power, she is born a daughter. Zezilia Ilar is the disappointment. Born after six brothers, she was supposed to be the son to restore her family's prestige. She intends to remedy her shortcomings by being a dutiful daughter, marrying well and producing children, preferably a set of seven sons. But when someone offers her an alternative, she begins to dream of more. In a society that worships a goddess, he follows the Almighty.

Hadrian Aleron, as a seventh son of a seventh son, stands to take up the second highest position in government, Sept Son. His main qualification for office is his birth. Despite preparing for this role from childhood, he does not desire what is to come. As a follower of the Almighty, he knows he will be the target of many, and his faith might eventually lead to death.

Beginning with Zezilia's training and following through to the final battle, THE TALENTED TRILOGY is an epic Christian fantasy adventure. Exploring the realities of living one's faith midst persecution and doing the right thing despite opposition, this trilogy encourages and challenges the reader to walk boldly as a Christian.