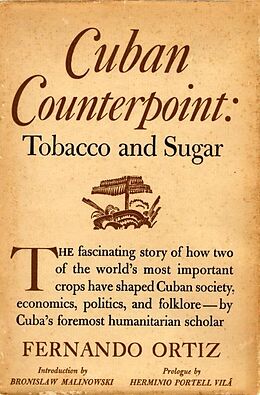 Tobacco and sugar have made the history, the character, and the economy of Cuba. In this entertaining book, packed with fascinating lore, scholarship in its most humane form, and the flavor of Fernando Ortiz's exceedingly civilized and humorous personality, the two important crops are seen from many points of view. Their economic aspects form the base, but they are examined, too, for their effects on folklore, art, science, industry, and daily human living. Out of personal experience, memory, and a lifetime of reading in all the western European languages, Dr. Ortiz has condensed exactly what is most telling, interesting, and significant about the leafy plant and the cane that together have made the story of his native land. The present translation, by Harriet de Ons, was made from a text specially prepared in Spanish by the author. It has an admiring introduction by the late Bronislaw Malinowski and a prologue by Herminio Portell Vil, noted Cuban historian and sociologist.

Fernando Ortiz is a Cuban lawyer, jurist, sociologist, and writer. He was born at Havana on July 16, 1881, and was educated in Havana, Barcelona, Madrid, and Italy. His public career has been long varied. He was formerly a member of the Cuban diplomatic-consular corps, Professor in the Faculty of Law of the University of Havana, member of the Cuban Congress (for ten years), director of the Legislative Office of Cuba, judge of the Cuban courts, and director of several magazines. Dr. Ortiz has written many articles and books on law, Afro-Cuban matters, criminology, sociology, history, and politics. In addition he has edited various collections of Cuban literary classics. His home is in Havana.