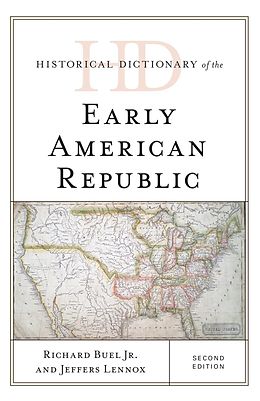 The drafting and ratification of the federal constitution between 1787 and 1788 capped almost 30 years of revolutionary turmoil and warfare. The supporters of the new constitution, known at the time as Federalists, looked to the new national government to secure the achievements of the Revolution. But they shared the same doubts that the Anti-federalists had voiced about whether the republican form of government could be made to work on a continental scale. Nor was it a foregone conclusion that the new government would succeed in overcoming parochial interests to weld the separate states into a single nation. During the next four decades the institutions and precedents governing the behavior of the national government took shape, many of which are still operative today.

This second edition of Historical Dictionary of the Early American Republic contains a chronology, an introduction, appendixes, and an extensive bibliography. The dictionary section has over 500 cross-referenced entries on important personalities, politics, economy, foreign relations, religion, and culture. This book is an excellent resource for students, researchers, and anyone wanting to know more about American history.

Autorentext
Richard Buel Jr. is emeritus professor of history at Wesleyan University and the author of six monographs on the revolutionary and early republican period.

Jeffers Lennox is professor of North American history at Wesleyan University. His research focuses on eighteenth-century Acadia, the northeast, and relations between British North American colonies (early Canada) and the United States during the Revolutionary era.