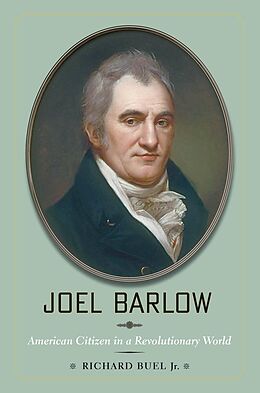 An in-depth look at the life and times of the early American poet and polemicist.

Poet, republican, diplomat, and entrepreneur, Joel Barlow filled many roles and registered impressive accomplishments. In the first biography of this fascinating figure in decades, Richard Buel Jr. recounts the life of a man more intimately connected to the Age of Revolution than perhaps any other American.

Barlow was a citizen of the revolutionary world, and his adventures throughout the United States and Europe during both the American and French Revolutions are numerous and notorious. From writing his epic poem,The Vision of Columbus, to plotting a republican revolution in Britain to negotiating the release of American sailors taken captive by Barbary pirates, Joel Barlow personified the true spirit of the tumultuous times in which he lived.

No one witnessed more climactic events or interacted with more significant people than Joel Barlow. His unique vision, his unfailing belief in republicanism, and his entrepreneurial spirit drove him to pursue the revolutionary ideal in a way more emblematic of the age than the lives of many of its prominent heroes.

In telling Barlow's story, Buel explores the cultural landscape of the early American republic and engages the broader themes of the Age of Revolution. Few books explore in such a comprehensive fashion the political, economic, ideological, diplomatic, and technological dimensions of this defining moment in world history.

"No earlier biographer has given nearly as detailed and rich a portrait of Barlow's perhaps singularly expansive role in the cultural life, commerce, politics, and intrigue of the age of revolution." -TheGuardian (UK)

Richard Buel Jr. is emeritus professor of history at Wesleyan University and author of America on the Brink: How the Political Struggle over the War of 1812 almost Destroyed the Young Republic and In Irons: Britain s Naval Supremacy and the American Revolutionary Economy.