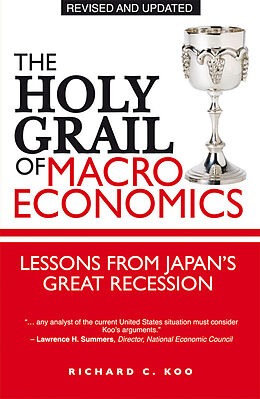 The Holy Grail of Macroeconomics

The revised edition of this highly acclaimed work presents crucial lessons from Japan's recession that could aid the US and other economies as they struggle to recover from the current financial crisis.

This book is about Japan's 15-year long recession and how it affected current theoretical thinking about its causes and cures. It has a detailed explanation on what happened to Japan, but the discoveries made are so far-reaching that a large portion of economics literature will have to be modified to accommodate another half to the macroeconomic spectrum of possibilities that conventional theorists have overlooked.

The author developed the idea of yin and yang business cycles where the conventional world of profit maximization is the yang and the world of balance sheet recession, where companies are minimizing debt, is the yin. Once so divided, many varied theories developed in macro economics since the 1930s can be nicely categorized into a single comprehensive theory- The Holy Grail of Macro Economics

Autorentext
Richard C. Koo is the Chief Economist of Nomura Research Institute, the research arm of Nomura Securities, the leading securities house in Japan. Consistently voted as one of the most reliable economists by Japanese capital and financial market participants for nearly a decade, he has also advised successive prime ministers on how best to deal with Japan's economic and banking problems. He served as an economist with the Federal Reserve Bank of New York, and was a Doctoral Fellow of the Board of Governors of the Federal Reserve System. Author of many books, including Balance Sheet Recession: Japan's Struggle with Uncharted Economics and its Global Implications, and a visiting professor of Waseda University, he was awarded the Abramson Award by the National Association of Business Economics, Washington, D.C. in 2001.

THE HOLY GRAIL OF MACROECONOMICS: LESSONS FROM JAPAN'S GREAT RECESSION

"... the Japanese policymakers who (said) the U.S. was in danger of falling into a prolonged period of economic weakness were right. To understand why ... you need to read a brilliant book by Richard Koo..."
Martin Wolf Financial Times

"There will probably never be a last word on the Japanese financial catastrophe of the 1990s but Richard Koo's book may be the most significant analysis ever published. Agree or disagree, any analyst of the current United States situation must consider Koo's arguments."
Lawrence H. Summers Director, National Economic Council Former President, Harvard University and the U.S. Secretary of the Treasury

"Richard Koo does it again. By presenting a unique theory regarding the Great Depression and Japan's recession of the last 15 years, Koo offers a new understanding of current problems in the U.S. and other economies. With many pearls of analytical wisdom, The Holy Grail of Macroeconomics: Lessons from Japan's Great Recession is a must-read for economists, policymakers and individual investors alike."
Nobuyuki ldei Founder & CEO, Quantum Leaps Corporation Former Chairman & CEO, Sony Corporation

"Richard Koo's pioneering work on balance-sheet recession has been invaluable in understanding the difficulty faced by Japan's economy and monetary authorities during the past 15 years. In this book, he has shown that the U.S. Great Depression was also driven by the same balance sheet concerns of the private sector, indicating that this kind of recession can happen to any post-bubble economy. I sincerely hope that the lessons contained in this book are put to good use in fighting similar recessions elsewhere, including the U.S. subprime crisis."
Yasushi Mieno Former Governor, Bank of Japan

"The Holy Grail of Macroeconomics presents a brilliant and original framework for understandingand overcominga post-bubble economic crisis such as the one the world faces today. By discrediting the conventional view that monetary policy is effective in combating a post-bubble recession, Richard Koo has made an invaluable contribution to economic theory and at just the right time."
Richard Duncan Author, The Dollar Crisis: Causes, Consequences, Cures Partner, Blackhorse Asset Management

Chapter 3 The Great Depression was a Balance Sheet Recession 85

Appendix: Thoughts on Walras and Macroeconomics 295

Titel
The Holy Grail of Macroeconomics