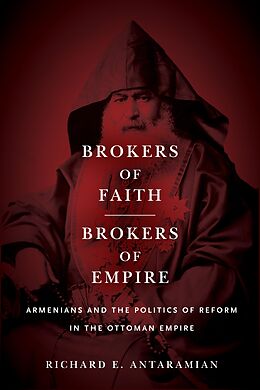 The Ottoman Empire enforced imperial rule through its management of diversity. For centuries, non-Muslim religious institutions, such as the Armenian Church, were charged with guaranteeing their flocks' loyalty to the sultan. Rather than being passive subjects, Armenian elites, both the clergy and laity, strategically wove the institutions of the Armenian Church, and thus the Armenian community itself, into the fabric of imperial society. In so doing, Armenian elites became powerful brokers between factions in Ottoman politics-until the politics of nineteenth-century reform changed these relationships.

In Brokers of Faith, Brokers of Empire, Richard E. Antaramian presents a revisionist account of Ottoman reform, relating the contention within the Armenian community to broader imperial politics. Reform afforded Armenians the opportunity to recast themselves as partners of the state, rather than as brokers among factions. And in the course of pursuing such programs, they transformed the community's role in imperial society. As the Ottoman reform program changed how religious difference could be employed in a Muslim empire, Armenian clergymen found themselves enmeshed in high-stakes political and social contests that would have deadly consequences.

Richard E. Antaramian is Assistant Professor of History at the University of Southern California.

The introduction lays out the book's principal overarching argument: the Ottoman reform programs that commenced in the late eighteenth century and continued throughout the nineteenth centralized the state by denying different political claimants their share of sovereignty. The empire is better understood not as a spoke-and-hub-without-the-wheel that kept geographically delineated peripheries apart from one another but rather as a tapestry predicated on dense overlapping networks through which sovereignty was both exercised and shared. The reorganization of imperial governance bid to transform that dense networked world into a top-down/center-periphery model atop which the central government would preside. The reform of non-Muslim communities transformed them from spaces-woven into the imperial tapestry through their religious institutions-into millets that were challenged to pull those religious institutions out of the informal and semiformal relationships that underwrote the shared and networked world of imperial governance.

One: The Constitution
chapter abstract

This chapter discusses the Armenian Constitution, a document originally introduced in 1860 that delineated how the Armenian community would participate in Ottoman imperial governance. The Constitution, like other reform initiatives that targeted non-Muslims in the middle of the Ottoman nineteenth century, is typically presented as something that spurred the rise of lay elites engaged in class struggle, which led to the secularization of the community and its subsequent nationalization. Chapter 1 instead presents the Constitution as fundamental to the shifting organization of Ottoman imperial governance that reset the partnership between the Armenian community and the state. In particular, it politicized the Armenian Church by making it an agent of state centralization. Armenian clergymen thus found themselves forced to choose sides in a struggle between a centralizing bureaucracy and the elites it sought to dislodge.

Chapter 2 advances a framework called nodal governance. The fiscal restructuring of the eighteenth century produced a networked world of Ottoman imperial governance in which multiple forces in imperial society shared power and the benefits of imperial rule. The institutions of the Armenian Church acted as nodes in this setting, conduits through which Armenian financial capital flowed to help suture the empire as a polity. This extent to which Armenian institutions were embedded in this world is brought into relief by the efforts of the reformers to reorganize the community as an empire-wide diocese. These efforts effectively challenged the community to withdraw its institutions from the networked world of imperial governance and integrate them into the imperial bureaucracy, thus committing Armenian reformers to use their own ecclesiastics to aid the introduction of a center-periphery binary in Ottoman governance.

Chapter 3 argues that the ideology of the Tanzimat was not Ottomanism but rather legal centralism. The introduction of the millet system in the nineteenth century therefore belonged to an effort to eradicate a pluralist legal order of things that privileged a number of actors throughout the Ottoman Empire, include high-ranking members of the Armenian clergy who had benefited from nodal governance and the connections it had afforded them to regional power brokers and Armenian financial capital. Those high-ranking clergymen thus blended a number of methods to reject the centralization of the state and the community and the loss of connections that this would entail. These methods included the invocation of ecclesiastical tradition and networking strategies-namely, brokerage and closure. The conflict between clergymen in the context of reform politics transformed network structures, leaving the Armenian community peripheralized in imperial governance and society.

Chapter 4 addresses the question of Ottomanism. Rather than an ideology, the chapter argues that Ottomanism is best understood as a repertoire of action or cultural tool kit. Historical scholarship on Ottoman reform has comfortably framed the centralization policies as a contest between the imperial state based in Istanbul and provincial actors who resisted its implementation. This has led historians to overlook the important fact that provincial Armenian reformers on the ground, particularly those among the clergy, fought on the front lines of state centralization. Unlike their metropolitan counterparts, these clergymen were steeped in the culture of the Church and the provinces and blended those resources with the new politics of empire to pursue centralization as part of a cultural toolbox that bridged center and periphery. State-building and centralization thus became key elements of Ottoman Armenian political thought in the second half of the nineteenth century.

The book's concluding chapter covers the final years of Bishop Mkrtich Khirmian's public life in the Ottoman Empire, which included a term as patriarch of Constantinople (r. 1869-1873) and ended with internal exile to Jerusalem in 1885. The sixteen-year arc covered in this chapter explains how Armenian reformers found themselves the victims of their own success. Khrimian and other provincial reformers not only enthusiastically participated in the reform programs, they successfully cut the threads that connected their community to other forces in imperial society. However, this precluded their ability to communicate with other sectors of that society. Reform initiatives that had won the approval of the government a few years prior were now viewed as subversive and seditious. It was the Ottoman state, which began punishing reformers, that ended the partnership with the Armenian community. Armenian politics, however, would remain oriented toward Istanbul.

The conclusion describes the dilapidated state in which the Armenian community was left as a result of imperial reform. The introduction of the millet system resulted in not only the peripheralization of Armenian in imperial governance or the loss of their ability to communicate with other sectors of imperial society but also the surrender of their social capital and claim to imperial sovereignty. An impoverished Armenian community could only look on in despair as the establishment of new connections and relationships to carry on the work of imperial governance excluded them. Cut from the imperial tapestry, Armenian reformers found themselves under siege, with prominent clergymen either killed or imprisoned. The state understood any Armenian effort to reform imperial society as a challenge to the new status quo and power-sharing arrangements, and thus responded with increasing brutality; these culminated as widespread massacres of Armenians in the 1890s.

Untertitel
Armenians and the Politics of Reform in the Ottoman Empire