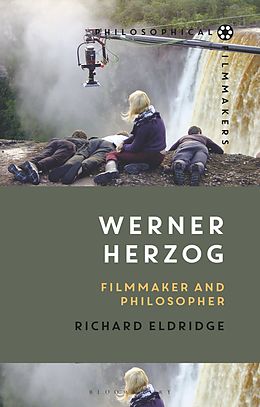 Werner Herzog has produced some of the most powerful, haunting, and memorable images ever captured on film. Both his fiction films and his documentaries address fundamental issues about nature, selfhood, and history in ways that engage with but also criticize and qualify the best philosophical thinking about these topics. In focusing on figures from Aguirre, Kasper Hauser, and Stroszek to Timothy Treadwell, Graham Dorrington, Dieter Dengler, and Walter Steiner, among many others, Herzog investigates the nature of human life in time and the possibilities of meaning that might be available within it. His films demonstrate the importance of the image in coming to terms with the plights of contemporary industrial and commercial culture. Eldridge unpacks and develops Herzog's achievement by bringing his work into engagement with the thinking of Freud, Merleau-Ponty, Nietzsche, Hegel, Cavell, and Benjamin, but more importantly also by attending closely to the logic and development of the films themselves and to Herzog's own extensive writings about filmmaking.

Richard Eldridge is the Charles and Harriett Cox McDowell Professor of Philosophy at Swarthmore College, USA. He is the author and editor of numerous books in philosophy and literature, including, as editor, The Oxford Handbook of Philosophy and Literature (OUP, 2009) and Stanley Cavell (CUP, 2003, 2008), and as author, Literature, Life, and Modernity (Columbia University Press, 2008), An Introduction to the Philosophy of Art (CUP, 2004), On Moral Personhood: Philosophy, Literature, Criticism, and Self-Understanding (University of Chicago Press,1989), and Leading a Human Life: Wittgenstein, Intentionality, and Romanticism (University of Chicago Press, 1997).