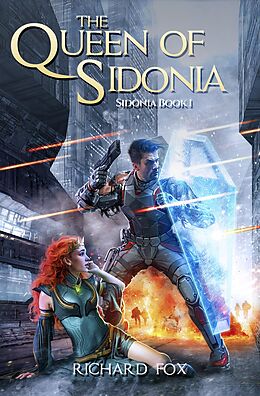 The Queen of Sidonia

Princess Cosima will be queen, if she survives to her eighteenth birthday.

In a galaxy controlled by massive corporations, few worlds are truly free. When explorers find a priceless wormhole near Sidonia, the hostile attention of the Aquitaine Corporation focuses on the small, backwater kingdom. To protect their world, Sidonia's royalty rush seventeen year old Princess Cosima into an arranged marriage, one that will guarantee a treaty and shield Sidonia from Aquitaine's clutches. But Cosima never asked for the honor of becoming the next queen to a man she doesn't love. With the fate of the planet in the balance, a team of deadly assassins targets Cosima. The best killers money can buy will see the Princess dead before her wedding day. Cosima will need her wits to uncover the identity of the assassins targeting her, and her courage to stay alive in the middle of an interstellar power struggle. If you like space opera novels with intrigue, a fast-paced plot and a tale of survival against impossible odds, then read The Queen of Sidonia today! *** Q&A with the Author What can you tell us about the book? Imagine The Princess Bride in a Star Wars setting. I've always liked the idea of a sci-fi fairy tale, and I wanted to tell a coming of age story about how duty to country and family can get in the way of what someone had in mind for their own future. So writing a teen and young adult science fiction novel seemed the best way to tell that story. If this were a movie, what would it be rated? PG-13 for sci-fi action, wartime violence and alcohol references.

Upon graduation from the United States Military Academy at West Point, Richard Fox began his decade-long service in the US Army as a Field Artillery and Military Intelligence officer. During that time, he served two fifteen-month tours in Iraq and was awarded the Combat Action Badge, the Bronze Star, and a Presidential Unit Citation.

He lives and works in southern Arizona with his incredible wife and two boys, amazing children bent on anarchy.

Titel
The Queen of Sidonia