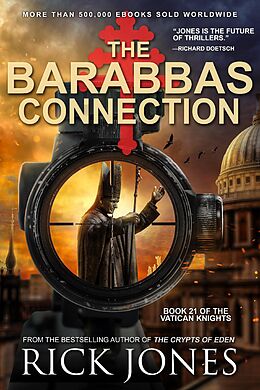 The Barabbas Connection (The Vatican Knights, #21)

During a visit to the United States, Pope Pius XIV is caught within the crosshairs of a lethal assassin. After scores of people are killed during an event featuring the Pope's address, a conspiracy theory emerges that the killings were conducted by one of the CIA's own. As the data trickles in, it becomes clear that the assassin is none other than Shari Cohen.

With the Vatican Knights serving as the pontiff's protective detail, Kimball Hayden is crushed to learn that she's involved with the assassinations. While questions begin to rise as to why Shari Cohen performed the act, there are indications that lead to an elite assassin who was believed to be dead: Barabbas.

Now that Shari finds herself on the run from the CIA, is she the Barabbas of lore who was believed dead but has been resurrected? Was she the tool of a conspiracy who was created to fulfill a dark agenda for a foreign power? Has Shari Cohen gone rogue? Or was she always a double agent?

As these questions plague the Vatican Knights, one thing becomes absolutely certain: Kimball Hayden now finds himself in a position to hunt down the woman he loves.