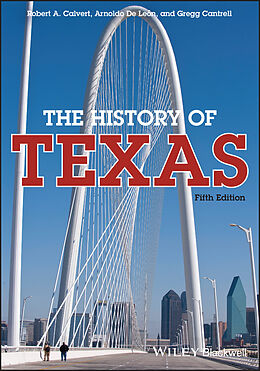 The History of Texas

Robert A. Calvert, a fifth-generation Texan, was Professor of History at Texas A&M University, where he taught for more than twenty-five years. He received his B.A. and M.A. degrees from the University of North Texas and his Ph.D. from the University of Texas at Austin. A former President of the Texas State Historical Association as well as a Fellow and Honorary Life Member of that organization, Dr. Calvert wrote or edited numerous books and articles, most of them on Texas history.

Arnoldo De León is C. J. "Red" Davidson Professor of History at Angelo State University, Texas. He is the author of several works on Texas and Mexican American history, among them The Tejano Community: 18361900 (1982, 1997); Mexican Americans in Texas: A Brief History (1993, 1999, 2009); Racial Frontiers: Africans, Chinese, and Mexicans in Western America, 18481890 (2002); and editor of War Along the Border: The Mexican Revolution and Tejano Communities (2012); and co-author of North to Aztlán: A History of Mexican Americans in the United States (2006). His numerous awards and distinctions include selection as Fellow of the Texas State Historical Association and membership in the Texas Institute of Letters. He was the recipient, in 2013, of the National Association of Chicana and Chicano Studies' (Texas Foco) Premio Estrella de Aztlán Lifetime Achievement Award.

Gregg Cantrell is the Erma and Ralph Lowe Chair in Texas History at Texas Christian University. He is the author or editor of numerous works on Texas history, including Lone Star Pasts: Memory and History in Texas (2007), Stephen F. Austin, Empresario of Texas (1999), and Feeding the Wolf: John B. Rayner and the Politics of Race (2001). He is a member of the Texas Institute of Letters and Fellow of the Texas State Historical Association, of which he served as president, 20132014.

Now in its fifth edition, The History of Texas is fully revised and updated to cover the entire sweep of Texas history, from the pre-Columbian era through the Election of 2012. Incorporating the latest scholarship in all fields of Texas historypolitical, social, and culturalthe new edition of this classic text offers the latest insights into the original inhabitants, explorers, heroes, villains, politicians, sports stars and celebrities, as well as the unsung heroes of history, the ordinary people who shaped the region's past and paved the way to Texas statehood. New perspectives on twentieth-century Texas events address the Progressive Era, the Great Depression, World War II and postwar modernization, and the state's many changes since the 1960s.

The book has been reorganized to better meet the needs of instructors and features a thoroughly rewritten final chapter covering a series of hot-button issues in modern-day Texas ranging from the recent gas-drilling boom to the rise of the Tea Party. With more than one hundred photographs and twenty-one maps, The History of Texas remains the most comprehensive, best-illustrated, and inclusive survey of the Lone Star State.

Titel
The History of Texas