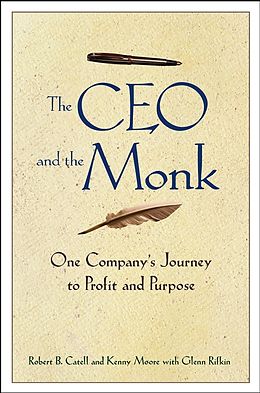 The CEO and the Monk

In a business era in which executives are taken away in handcuffs and corporate malfeasance and scandal dominates the business headlines, there is tremendous value in the stories of ethical companies and spiritual business leaders. The CEO and the Monk is one such compelling story, the story of KeySpan, the nation?s fifth largest energy giant and a profitable, Fortune 500 company, and the two KeySpan executives?one a former monk?whose unique working relationship is based on something as simple and powerful as 'doing the right thing.' This isn?t yet another prescriptive business guide written by breathless consultants. It is a story about a real business and how two unusual and dedicated humanists can keep their eyes on profits and ethics at the same time.

Autorentext
Robert B. CATELL is the CEO of KeySpan, one of the nation's largest energy providers. He is one of the most highly respected business leaders in New York.
KENNY MOORE is a former monk who left the religious life for a successful career in human resources. He is currently Corporate Ombudsman at KeySpan.
GLENN RIFKIN is a veteran business journalist who has written extensively for the New York Times and coauthored many groundbreaking business books, including the Wiley title Radical Marketing, The CEO Chronicles, and The Ultimate Entrepreneur.

Klappentext
Advance praise for The CEO and the Monk

"The CEO and the Monk is an enormously interesting and utterly charming book. We all know that we have to restore faith in our capitalist system if it is to survive and flourish. Bob Catell, with the assistance of an unusual advisor, did just that at a critical moment in his company's evolution and our nation's history. This is a rare business story that will both amaze and inspire you."
David Rockefeller

"This is a wonderful story of commitment, integrity, and the power of relationships. It offers the possibility that executives who care about community and people bring both honor and economic success to their business. Inspiring and practical, The CEO and the Monk threatens to restore our faith in those who lead us. I tip my hat to Bob and Kenny for telling the story of how human values can be brought into the marketplace. This book is unique and much needed."
Peter Block, consultant, speaker, and author of many bestselling books, including The Answer to How Is Yes, winner of the 2002 Independent Publisher Book Award for Business Breakthrough of the Year

"The CEO and the Monk offers great lessons for any leader or HR professional who wants to build a positive work environment. Where else can you learn to handle such business challenges as mergers and acquisitions, growth, deregulation, cutbacks, and change intertwined with the human issues like employee involvement and communication in one place? Filled with best practice concrete examples, this is one of the finest case studies for engagement and retention that I have ever seen."
Beverly Kaye, founder and CEO, Career Systems International, and coauthor of Love It, Don't Leave It: 26 Ways to Get What You Want at Work

"Managers don't always recognize the critical need for trust and understanding. The CEO and the Monk will awaken their sensibilities. It brilliantly blurs the line between the soft and the hard of business, and proves that you don't have to sacrifice your soul to make a profit."
Jim Champy, Chairman of Consulting for Perot Systems and coauthor of Reengineering the Corporation

Inhalt
Introduction: What Is Good for the Soul Is Also Good for Business.

Chapter One: The Corporate Funeral.

Epilogue: The CEO; The Monk.

Titel
The CEO and the Monk

Untertitel
One Company's Journey to Profit and Purpose