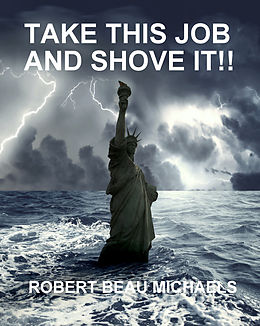 Take This Job and Shove It!!

A bizarre chain of events in a wacky comedy/drama of errors propels a popular psychology/best-selling author, Dr. Jack Stroker, into the role of a feared assassin and secret agent, and yet he's never killed a soul! And his writing and life has had a profound inspirational effect on the president of the United States--Dirk Hamilton: a man who decides to tell the truth about what's wrong with America!

While Dr. Jack Stroker's life gets totally crazy as he becomes perceived as an assassin/secret agent and action hero, President Dirk Hamilton's life is not that of a happy camper--America has gone to economic hell with corporate downsizing, jobs going overseas, high unemployment, a black hole of national debt, and financial corruption in banks and Wall Street. He hates his job and he now spends most of his time in his West Wing study, occasionally smoking marijuana, playing his guitar, and listening to Pink Floyd and the rock music of the 1960s. And after reading Dr. Jack Stroker's latest best-selling book, Take This Job and Shove It!!, he's ready to do just that! To make matters worse, his wife, Amy, the First Lady, wants a divorce because she's in love with someone else--a woman. She was convinced to change her life after reading Stroker's previous best-selling book, You Can Change Your Life.

But then something strange happens. President Dirk Hamilton, building upon the popularity and momentum of Stroker, rather than resigning, decides to make one last attempt to revitalize and save America. He decides to do something very bold and daring: to be the first American president to tell the dirty, inconvenient truth about what's really happening in America! Furthermore, he decides to close all the U.S. military bases across the world, bring home the troops, and bring back the 1960s days of 'peace and brotherly love' to America--which he calls the American Awakening. And so he befriends Dr. Jack Stroker, who ironically through crazy, outrageous circumstances, has become something of a cultural hero and who is now being perceived as a secret Russian agent by the highest levels of the American government--especially the CIA! And together, Stroker and Hamilton start to put together a plan to revitalize America in a "Make Love, Not War" campaign. But this is something that the corporate-owned government and the military-industrial complex will absolutely not let happen--and consequently, all hell is about to break loose in American society! The question now being asked at the highest levels of the intelligence community is: Is this a Russian conspiracy to destroy the American way of life so that Russia can become the new superpower in the world?!

Titel
Take This Job and Shove It!!