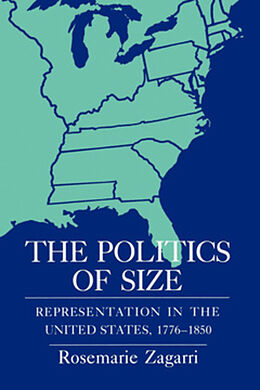 The Politics of Size

After the Revolution, Americans faced the challenge of expanding representative government throughout an extensive territory. The complex process of adapting republicanism to a vast area generated many conflicts over representation in both states and the nation-conflicts that produced a division between the large states and the small states. Using concepts of historical geography, Rosemarie Zagarri examines how Americans' notions about space influenced the writing of the U.S. Constitution and the shaping of the nation's political institutions.

In The Politics of Size, Zagarri offers a bold explanation of political alignments in the early republic. The split between large and small states emerged, she asserts, not at the Constitutional Convention of 1787 but in the years before, during debates over the relocation of state capitals and the reapportionment of state legislatures. The local conflicts culminated in the fierce struggle between the two factions at the federal convention. Far from ending there, the division persisted well into the nineteenth century, resurfacing when Congress discussed such controversial issues as congressional redistricting, the selection of presidential electors, and the reapportionment of the House of Representatives. Only in 1850 did the conflict based on state size merge with, and become subsumed by, the growing controversy between North and South.

Titel
The Politics of Size

Untertitel
Representation in the United States, 1776-1850