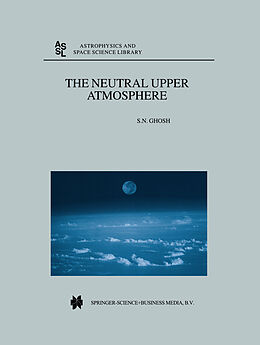 After World War II, Professor S.K. Mitra wrote a comprehensive book called The Upper Atmosphere, which dealt with information available from ground-based and balloon-borne experiments. As a result, topics such as day airglow were investigated and further ground-based experiments using incoherent back-scattering were carried out. These activities resulted in new information on the ozonosphere.

The dramatic discovery of ozone holes forms a new and exciting chapter in the discovery of atmospheric processes. While dealing with the limits of the atmosphere, reference may be made to interstellar molecules whose discovery has raised considerable scientific curiosity. Knowledge of the solar-terrestrial relationship advanced a great deal when more information on solar radiation became available by measuring higher energy photons in the UV, EUV, and even X-ray regimes.

All this information is incorporated in this volume and presented under the title The Neutral Upper Atmosphere.

Preface. 1. Atmospheric Regions, their Constituents and Chemistry. 2. Pressure and Density Distributions In Terrestrial Atmosphere. 3. Atmospheric Ozone, Its Depletion and Antarctic Ozone Hole. 4. Effects of Solar UV, EUV and X-ray Radiations on Upper Atmosphere. 5. Airglow I Four Main Airglow Emissions. 6. Other Airglow Emissions and Metastable Atoms and Molecules. 7. The Limit of Atmosphere and the Space Beyond. 8. Life Related Molecules and Masers in Space.