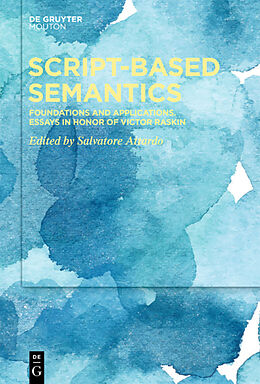 The book contains essays in honor of Victor Raskin. The contributions are all directly related to some of the major areas of work in which Raskin's scholarship has spanned for decades. The obvious connecting idea is the encyclopedic script-based foundation of lexical meaning, which informs his pioneering work in semantics in the 1970s and 1980s. The first part of the book collects articles directly concerned with script-based semantics, which examine both the theoretical and methodological premises of the idea and its applications. Script-based semantics is the foundation of both Raskin's ground-breaking work in humor research (addressed by the articles in part 2) and in Ontological semantics (addressed in part 3), the most recent development of script-based semantics. The fourth part is dedicated to a less-known, but equally important, strand of Raskin's research, the applications of linguistics to other fields, including writing, lexicography, and professional applications (e,g., tourism). Overall, the book provides and up-to-date, in-depth discussion of an influential strand of the discussion on semantics and its most recent developments and influence on other seemingly unrelated fields, such as Cognitive Linguistics.

Untertitel
Foundations and Applications. Essays in Honor of Victor Raskin