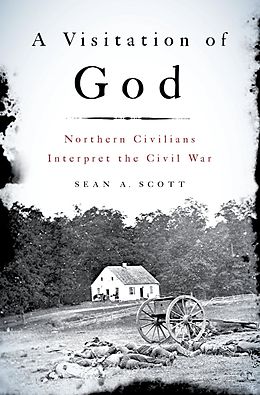 A Visitation of God

This book examines the Civil War from the perspective of the northern laity, those religious civilians whose personal faith influenced their views on politics and slavery, helped them cope with physical separation and death engendered by the war, and ultimately enabled them to discern the hand of God in the struggle to preserve the national Union. From Lincoln's election to his assassination, the book weaves together political, military, social, and intellectual history into a religious narrative of the Civil War on the northern home front. Packed with compelling human interest stories, this account draws on letters, diaries, newspapers and church records along with published sources to conclusively demonstrate that many devout civilians regarded the Civil War as a contest imbued with religious meaning. In the process of giving their loyal support to the government as individual citizens, religious Northerners politicized the church as a collective institution and used it to uphold the Union so the purified nation could promote Christianity around the world. Christian patriotism helped win the war, but the politicization of religion did not lead to the redemption of the state.

Sean A. Scott is Post-doctoral Fellow in the Center for American Studies and Visiting Assistant Professor in the Department of Leadership and American Studies, Christopher Newport University.

Introduction Chapter 1. "If God Saves Not Our Country It Must Be Lost" Providence, Secession, and the Outbreak of War Chapter 2. "Until the Great Sin . . . Has Been Removed" God's Chastening, the Sacred Union, and Emancipation Chapter 3. "Try to Live the Life of a Christian" The Personal Faith of Women on the Home Front Chapter 4. "Christian Patriotism" in Flush Political Preaching, Antiwar Dissent, and Summer Thanksgiving Chapter 5. "Exhorting You to Be Faithful to God and to Men" Fatherly Counsel and the Path to Christian Manhood Chapter 6. "Discord Sown among Brethren" Church Division and Bible Appropriation Chapter 7. "Earth Has No Sorrow That Heaven Cannot Cure" Civilian Perspectives on Death and Eternity Chapter 8. "God Be Thanked the Nation and Humanity Were Saved" Retribution against Traitors, the Reelection of Lincoln, and the Termination of War Chapter 9. "How Mysterious Are the Ways of Providence" Civilian Attitudes toward the Assassination of Lincoln Epilogue Notes Bibliography Index

Titel
A Visitation of God