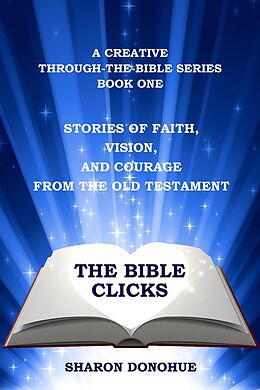 The Bible Clicks, A Creative Through-the-Bible Series, Book One: Stories of F...

SPOILER ALERT: This book has been known to change lives.

The Bible Clicks captures Scripture's most compelling highlights and unpacks those gems in 365 episodes, chronologically arranged and cleverly illustrated, uniquely designed for curious teens, creative adults, and anyone who has ever felt intimidated by the Bible-a delightful gift for any occasion. The carefully crafted storytelling in this two-volume set maintains an accurate rendering of the Scriptures, sequentially portraying historical narratives, prophecy, wisdom literature, poetic songs, letters, and the apocalyptic book of Revelation.

With 179 captivating episodes, Book One features the early heroes, men and women with extraordinary stories of faith, from revered founders Abraham and Moses to courageous leaders like Deborah and David and visionary prophets like Isaiah and Daniel, whose voices still speak with amazing relevance.

When you travel through Scripture by way of stories, the Bible clicks.

SHARON DONOHUE is a free-lance journalist and former magazine editor. She began her career in Chicago as an editor for Moody Monthly, a Christian family magazine, then served as Managing Editor of Marriage Partnership and as Editor of Today's Christian Woman, publications of Christianity Today, Inc.

Sharon majored in Bible at Multnomah University (formerly Multnomah Bible College) and earned a B.S. in journalism from the University of Oregon. After moving from Chicago, she pursued a master's degree in education and taught English and social studies for 15 years.

Titel
The Bible Clicks, A Creative Through-the-Bible Series, Book One: Stories of F...