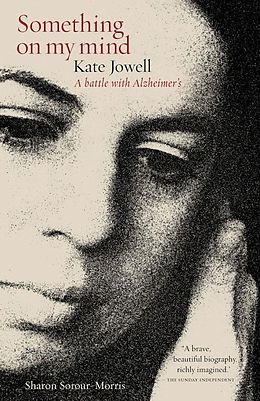 Something on my Mind

Kate Jowell was the director of the University of Cape Town's Graduate School of Business - the first woman to hold such office in South Africa - when, at the age of 59, she was diagnosed with early Alzheimer's disease. Attractive, glamorous and hard-working, she had, up till then, been a brilliant thinker whose high-profile career included being one of the first editors of women's magazine Fair Lady, and establishing herself as a labour specialist at the height of industrial unrest in the 1980s, when she became a pioneering consultant and a highly regarded business academic. Sharon Sorour-Morris met Kate Jowell at the end of 2002 and spent the following year working closely with her, recording her devastating mental decline and capturing the memories of those who were closely involved in her life. Kate's poignant story reveals the havoc this insidious disease wreaks not only on the sufferer's life, but also on family, friends, colleagues and caregivers. It also recounts a fascinating social history, as Kate's life crossed that of many well-known personalities: Albie Sachs, Jenny le Roux, Gorry Bowes Taylor, Sydney Baker, Sue MacGregor, former President FW de Klerk, Denis Worrall, George Ellis and Mamphela Ramphele, among others, as well as interesting international academics such as Robert Rotberg. While Kate's story is a tragic one, it is not without inspiration and hope: an account of a remarkable woman who lived her life with optimism and who faced the prospect of losing her mind with extraordinary dignity and courage. This is her true legacy.

Titel
Something on my Mind