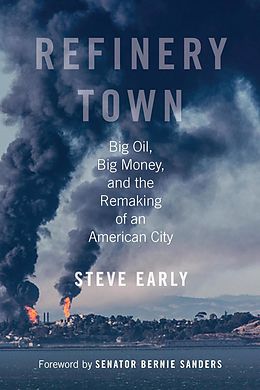 The People vs. Big Oil-how a working-class company town harnessed the power of local politics to reclaim their community

With a foreword by Bernie Sanders

Home to one of the largest oil refineries in the state, Richmond, California, was once a typical company town, dominated by Chevron. This largely nonwhite, working-class city of 100,000 suffered from poverty, pollution, and poorly funded public services. It had one of the highest homicide rates per capita in the country and a jobless rate twice the national average.

But when veteran labor reporter Steve Early moved from New England to Richmond in 2012, he discovered a city struggling to remake itself. In Refinery Town, Early chronicles the 15 years of successful community organizing that raised the local minimum wage, defeated a casino development project, challenged home foreclosures and evictions, and sought fair taxation of Big Oil.

A short list of Richmond's activist residents helps to propel this compelling chronicle:

"Refinery Town provides an inside look at how one American city has made radical and progressive change seem not only possible but sensible."-David Helvarg, The Progressive

Steve Early has been an organizer, lawyer, union representative, and labor activist for the past forty-five years. He is the author of three other books, including Save Our Unions: Dispatches from a Movement in Distress. He lives in Richmond, California, with his wife.

ONE
A Refiner's Fire

TWO
The Greening of City Hall

FIVE
An Election Not for Sale

SEVEN
Gentrification and Its Discontents

Untertitel
Big Oil, Big Money, and the Remaking of an American City