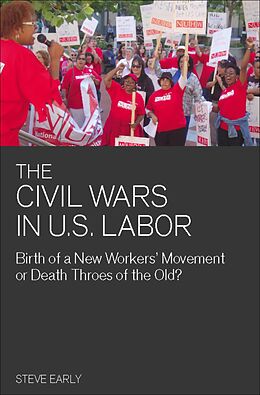 The Civil Wars in U.S. Labor

"Should be required reading for all workers' rights advocates." -Bernie Sanders Between 2008 and 2010, the progressive wing of the US labor movement tore itself apart in a series of internecine struggles. More than $140 million was expended, by all sides, on organizing conflicts that tarnished union reputations and undermined the campaign for real health care and labor law reform. Campus and community allies, along with many rank-and-file union members, were left angered and dismayed. In this incisive book, labor journalist Steve Early draws on scores of interviews and on his own union organizing experience to explain why and how these labor civil wars occurred. He examines the bitter disputes about union structure, membership rights, organizing strategy, and contract standards that enveloped SEIU, UNITE HERE, the California Nurses Association, and independent organizations like the Federación de Maestros de Puerto Rico and the new National Union of Healthcare Workers in California. Along the way, we meet rank-and-file activists, local union officers, national leaders, and concerned friends of labor who were drawn into the fray, as Early considers the quest to stem the tide of the labor movement's long decline.

Untertitel
Birth of a New Workers' Movement or Death Throes of the Old?