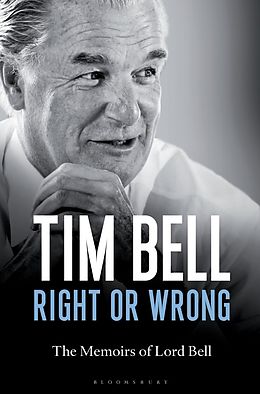 Tim Bell was the original 'spin doctor'; the Chairman of Bell Pottinger public relations, and one of the best known figures in UK media communications. Right or Wrong is his highly personal account of political, commercial and social life from the '70s to the present day. With a refreshingly uncompromising manner, Bell applies his acerbic wit and resolutely right wing sensibility to everything from managing Margaret Thatcher's election campaigns to his dealings with Ronald Reagan, F.W. de Klerk, the Saatchi brothers, and his late friend David Frost, to name a few.

Born into a resolutely middle-class suburban family during the war, he left school at the age of 18 for a job as chart-boy at ABC Television. Rising through the ranks of the burgeoning West End advertising industry, in 1970 he became a co-founder of the Saatchi & Saatchi agency. Bell's main claim to fame, however, was developing campaigns for the Conservative Party during the general elections of 1979, 1983 and 1987, each of which put Margaret Thatcher into Downing Street, and for which he was awarded a knighthood.

In his time, he worked with some of the greatest names of modern politics, business, and media and on world events, historical and controversial alike. First hand memories spill across the pages as Tim Bell gives his ring-side account of key political moments such as the miner's strike, the Cold War, the poll tax riots, the end of Apartheid and the demise of Margaret Thatcher. Controversial, irreverent and outspoken, this is a book that is as polarising as Tim Bell was himself. It attracted admiration and rage in equal measure. And he would not have had it any other way.

Tim Bell was a British advertising and public relations executive and founder of Bell Pottinger, one of the most celebrated PR agencies in the UK.

Untertitel
The Memoirs of Lord Bell