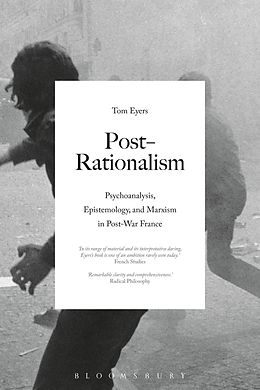 Post-Rationalism takes the experimental journal of psychoanalysis and philosophy, Cahiers pour l'Analyse, as its main source. Established by students of Louis Althusser in 1966, the journal has rarely figured in the literature, although it contained the first published work of authors now famous in contemporary critical thought, including Alain Badiou, Jean-Claude Milner, Luce Irigaray, André Green and Jacques-Alain Miller. The Cahiers served as a testing ground for the combination of diverse intellectual sources indicative of the period, including the influential reinvention of Freud and Marx undertaken by Lacan and Althusser, and the earlier post-rationalist philosophy of science pioneered by Gaston Bachelard, Georges Canguilhem and Alexandre Koyré.

This book is a wide-ranging analysis of the intellectual foundations of structuralism, re-connecting the work of young post-Lacanian and post-Althusserian theorists with their predecessors in French philosophy of science. Tom Eyers provides an important corrective to standard histories of the period, focussing on the ways in which French epistemological writing of the 1930s and 1940s - especially that of Bachelard and Canguilhem - laid the ground for the emergence of structuralism in the 1950s and 1960s, thus questioning the standard historical narrative that posits structuralism as emerging chiefly in reaction to phenomenology and existentialism.

Tom Eyers is Assistant Professor of Philosophy at Duquesne University. He is the author of Lacan and the Concept of the Real (2012).

Acknowledgements \ Introduction \ 1. Psychoanalytic Structuralism in the Cahiers pour l'Analyse \ 2. Bachelard, Lacan and the Impurity of Formalization \ 3. Science, 'Suture' and the Signifier \ 4. Discourse and Ideology in Post-Rationalism: Althusser, Badiou, Lacan, Milner \ 5. Canguilhem, Deleuze and the Problem of Life \ Conclusion \ Bibliography \ Index