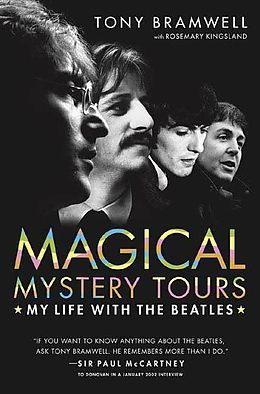 "If you want to know anything about the Beatles, ask Tony Bramwell. He remembers more than I do."- Sir Paul McCartney to Donovan in a January 2002 interview

Tony Bramwell's remarkable life began in a postwar Liverpool suburb, where he was childhood friends with three of the Beatles long before they were famous. And by the time he caught up with George Harrison on the top of a bus going to check out "The Beatles, direct from Hamburg"--one of whom George turned out to be--Tony was well on his way to staying by them for every step of their meteoric rise.

If anything needed taking care of, Tony Bramwell was the man the Beatles called, the man they knew they could trust. His story has been sought after for years, and now, here it is, full of untold stories and detailing with an insider's shrewd eye the Apple empire's incomparable rise, Brian Epstein's frolics, Ken Kesey's Merry Pranksters, Phil Spector's eccentric behavior, and new stories about Yoko Ono, the Stones, and the life--his life.

From developing the first Beatle music videos to heading Apple Films, and from riding bikes and trading records with George Harrison to working and partying with everyone from the Beatles to Hendrix, Ray Charles, and The Who, Tony's life really did (and does) encompass a who's who of rock.

His story reveals fresh insights into the Beatles' childhoods and families, their early recordings and songwriting, the politics at Apple, and Yoko's pursuit of John and her growing influence over the Beatles' lives. And it uncovers new information about the Shea Stadium concert footage, John Lennon's late-night "escapes," and more. From the Cavern Club to the rooftop concert, from the first number one to the last, and from scraps of song lyrics to the discovery of the famous Mr. Kite circus poster, Tony Bramwell really did see it all.

Conversational, direct, and honest, the ultimate Beatles insider finally shares his own version of the frantic and glorious ascent of four boys from Liverpool lads to rock and roll kings.
Mehr anzeigen

Untertitel
My Life with the Beatles