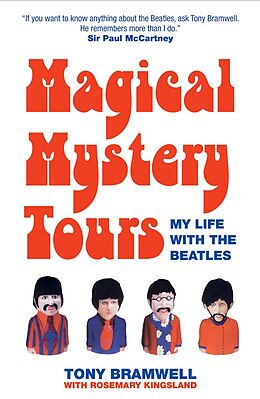 Tony Bramwell's remarkable life with The Beatles began in a post-war Liverpool suburb where he was childhood friends with John, Paul and George. By the time he unexpectedly ran into George Harrison on top of a bus, Tony was well into a life story absolutely unlike any other. At Apple Record's insistence, Tony stayed with The Beatles for every step of their meteoric rise. His story has been sought for over thirty years, and here it is, detailing with an insider's shrewd eye the incomparable success and inevitable failure of the Apple empire, Brian Epstein's frolics, Ken Kessy's Merry Pranksters, Phil Spector's eccentric behaviour, as well as never-heard-before stories about Yoko Ono. 'Magical Mystery Tours' reveals fresh insights that have never been published in any of the 800 plus books already on the market, including compelling details of the early recordings and songwriting and Yoko's pursuit of John and her growing influence over The Beatles' lives. From the first number one to the last and from scraps of song lyrics to the discovery of the famous Mr Kite circus poster, this is a broad ranging account of the swinging sixties and the decade's most successful rock band.

Untertitel
My Life with the Beatles