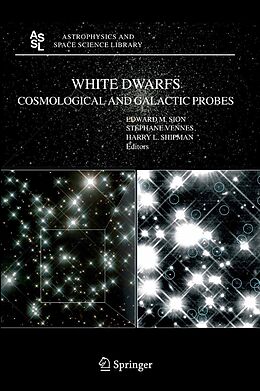 In the past few years, general astronomical interest has concentrated on s- eral objects and phenomena where white dwarf stars play a key role. T Type Ia supernovae have been used as evidence to show that, in fact, Einstein did not make his greatest blunder when heallowedfor the possibility of a c- mological constant. Improvements in our knowledge of the Hubble parameter have revived interest in the use of white dwarf stars as a different typeofc- mochronometer to measuretheage of the Galaxy andthus set constraints on the age of the Universe. In roughly the same time period, there have been considerable advances in our understanding of white dwarf stars, both as i- lated stars in the ?eld and as members ofinteracting binary systems. Much of thisadvance has come from theavailabilityof spacecraftobservations from missions like HST T T, IU UE, ROSAT T, EXOSAT T, Chandra, ORFEUS, EUVE, HUT T T, and FUSE. The discovery of thousandsof new white dwarfs from a number oflarge surveys and thepotential of theSloan Digital SkySurvey have added impetus to the ?eld. Studies ofinteracting binaries such as classical novae, supersoft X-ray bi- ries, symbiotic variables, dwarf novae and nova-like objects have revealed the diff ferences between thethermal evolution of singleand close binary systems aswell as heightenedinterest in these systems as progenitors of the cosmol- ically important Type I supernovae. A more speculative question is whether classical novae can beunderstood well enough that theymight provide another kind of standard candle.

The emphasis on white dwarf stars and cosmology arises from the most recent advances in cosmological and galactic structure research in which white dwarf stars are playing a very prominent role. Examples are Type Ia supernovae (i.e. white dwarf supernovae), the origin and evolution of the universe, the age of the galactic disk, cosmochronology using white dwarfs in globular clusters and galactic clusters, and the physics of accretion onto compact (very dense) stars. As an assisting guide to the reader, we have included, by invitation, comprehensive review articles in each of the four major areas of the book, white dwarf supernovae, cosmology, accretion physics and galactic structure. The reviews include introductory material that they build upon.

The book is suitable and most useful to advanced undergraduates, graduate students and scientific professionals (e.g. astronomers, astrophysicists, cosmologists, physicists).